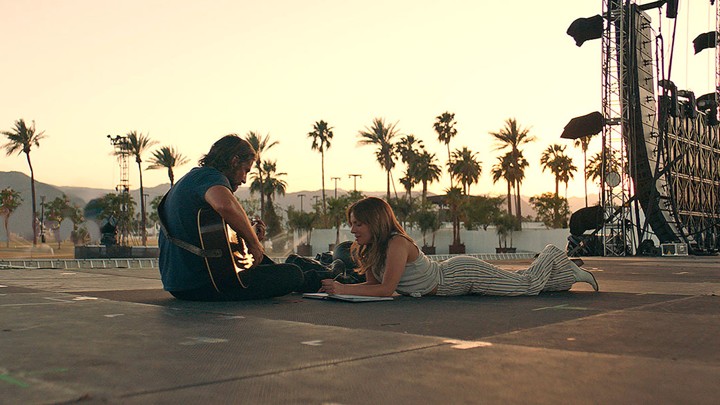 A Star Is Born has been the most hyped movie of the year ever since its viral, meme inspiring trailer was released back in June.  But it’s rare for an actual movie to be as good as its elite trailer.  Case in point: The best two minutes of film I saw last year wasn’t in Get Out or Dunkirk or Lady Bird or I, Tonya.  The best two minutes I saw was honestly the official trailer of The Florida Project.  Now, The Florida Project is a legitimately good movie, but if there was one common feedback I got from others it was that the movie wasn’t as good as the trailer, which I totally agree.  I have no desire to watch The Florida Project again, yet I continue to watch the trailer once in awhile for reasons I can’t explain.

Is A Star is Born as good as its trailer?  It’s not even a debate.  A Star is Born emphatically meets the hype that so many movies fall just short of (cough BlacKkKlansman cough). Bradley Cooper’s directorial debut may be a little corny, it may be a little strange at times, it may even be a little musically dated, but all in all it is absolutely UNDENIABLE.  The boy who cried best movie ever appears to have emerged for the first time in 2018.

There’s something so surprising about an A list actor turning out to be a great director. It’s one thing for smaller stars somewhat less in the public eye like Jordan Peele and Greta Gerwig to reveal this talent, but it’s kind of jarring to see literally the sexiest man alive according to People Magazine be this competent behind the camera.  I equate it to the type of athletes that eventually become coaches.  The best coaches are vastly made up of ex-role players whereas when ex-superstars try to coach it usually turns into a shitshow (Jason Kidd, Magic Johnson, Isaiah Thomas, etc).  But with Clint Eastwood, Ben Affleck, and now Cooper’s success, maybe this skillset transition, at least in the movie industry, is more common than we think.

Speaking of Dirty Harry, this iteration of A Star is Born was originally slated to be directed by Eastwood (back when Beyonce was attached to star), but it never got off the ground so he eventually gave it to his protégé Cooper.  You’ll recall the two collaborated on 2014’s American Sniper and it’s been widely reported that Cooper closely modeled what it takes to direct a film after the methods he soaked in from Eastwood during that shoot.  Whatever he did it worked, because Cooper’s vision is not only a lock for a Best Picture nomination but also Best Director.

Of course it’s not all Cooper.  Lady Gaga as the titular Star doesn’t just do a good job “for a pop star” but she displays legit acting chops.  If you didn’t know who she was beforehand you would have just assumed she was a yet undiscovered professional thespian that could sing.  She’s might even be my favorite fictional singer since Tia Carrere in Wayne’s World.  MIGHT.

One of the ways to spot flaws in a movie is if you can picture anyone else in a role that would have made it better, and it’s really hard to imagine someone grasping Ally like Gaga does (no, not even the Queen B).  There’s also Dave Chappelle, Sam Elliott, and Cooper’s dog in real life Charlie that can’t be replaced either (I’m expecting a Best Supporting Actor nom for Elliott and a Best Good Boy win for Charlie).

If anything, the one change I would MAYBE consider is swapping out Cooper the actor for Collin Farrell or Jake Gyllenhaal, however I am coming back around on this performance.  I found Cooper’s very deliberate change in speaking voice to be a little perplexing, but by the end you learn to understand what he’s doing.  It’s also apparent that he clearly poured his blood, sweat, and tears into a role that’s insinuated to hit pretty close to home.  Cooper himself is sober 6 years and you can tell he is exercising some real demons playing a drunk.  So scratch that, he’s irreplaceable too.

I gripe a lot about Hollywood not making enough movies for adults anymore but that’s not entirely true.  They do make movies for adults, it’s just that they’re mostly low budget movies.  In Bill Simmons recent podcast with Matt Damon, Damon was talking about this really cool whale watching scene that they wanted to shoot for the end of 2016’s Manchester By the Sea, but they simply ran out of money and couldn’t afford to shoot it. Obviously Damon was proud of what they accomplished and the film was a success, but he thought cutting that scene due to their $8 million dollar budget lowered the ceiling of the movie.  A Star is Born is the rare adult movie that doesn’t have that problem.  Warner Bros gave it a $35 million dollar budget which is really all you would ever need for a movie that doesn’t have car chases or CGI (assuming Cooper’s glorious mane in this is not CGI).  It’s an investment that has not only returned more than double the budget in just two weeks, but captures a really terrific film that is bound the win some awards this winter.  Grade: A+ 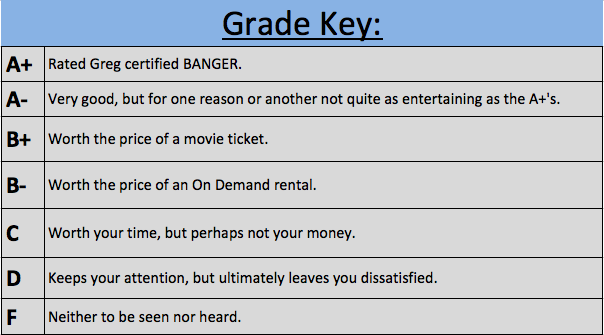