You know how most Pixar movies operate on two different wavelengths?  One for the kids in the theater and one for the adults that drove them there?  I think that Marvel has been employing a similar tactic for their immensely successful superhero factory.  They make movies that satisfy the hopes and dreams of the comic book nerds, but secondly through the use of humor and A-List talent, these farfetched films will also suffice as an entertaining night out for most adults.  While she’d certainly have reservations, I don’t think even my Mom would hate movies like Spiderman: Homecoming, Black Panther, or Thor: Ragnarok.  I really don’t, for the recent string of Marvel has either been really funny, really interesting, or both.

But Mom would DEFINITELY hate the newest chapter, Avengers: Infinity War, the self described “biggest crossover event in cinematic history.”  This film appears to operate only on the nerd spectrum.  I mean, just take a look at this fucking guy.

That’s Thanos.  He’s a purple alien on a quest to collect six magical stones that will make him the most powerful being in the universe.  The only thing standing in his way is a ragtag group of superheroes that like to bicker in pressure filled situations.  Sound stupid?  That’s because it is stupid.  Avengers: Infinity War is……fine.  It’s fine.  I’m telling you it’s fine.  Fine at best.  If you’ve generally been into these movies I guess it’s worth your time to see what happens, however it’s certainly not worth your money (again, just your time).  There are a couple good jokes and I’ll admit it is kinda cool to see all of these famous faces and Chris Evans’s beard on the same screen, but that’s about it.

I rolled my eyes A LOT during the 150+ minutes.  I rolled my eyes at the Harry Potter-esque villains, I rolled my eyes at the borderline plagiaristic ending, and I definitely rolled my eyes every time Scarlet Witch refers to her new beau Vision as “Viz.”  You see, Scarlet Witch is a woman and Vision is a self-aware robot (I think?).  The two were just friends in 2016’s terrific Captain America: Civil War, but since then they’ve apparently entered into a perfectly normal, consensual sexual relationship.  To substantiate this curious development between machine and woman, the writers gave them pet nicknames for each other.  It reminded me of one of those couples that are a little too overzealous with the use of the term “babe” in public.  I told you this was stupid.    Grade: B-

You know that extremely tense sensation you get when you’re driving 12 miles over the speed limit, turn a corner, and happen to blow by a previously hidden cop car?  You spend the next eight seconds anticipating the worst and not wanting to look in the rearview mirror, but know that eventually you’ll have to look?  That’s what watching A Quiet Place is like.  90 straight minutes of held breath and peering through your fingers. 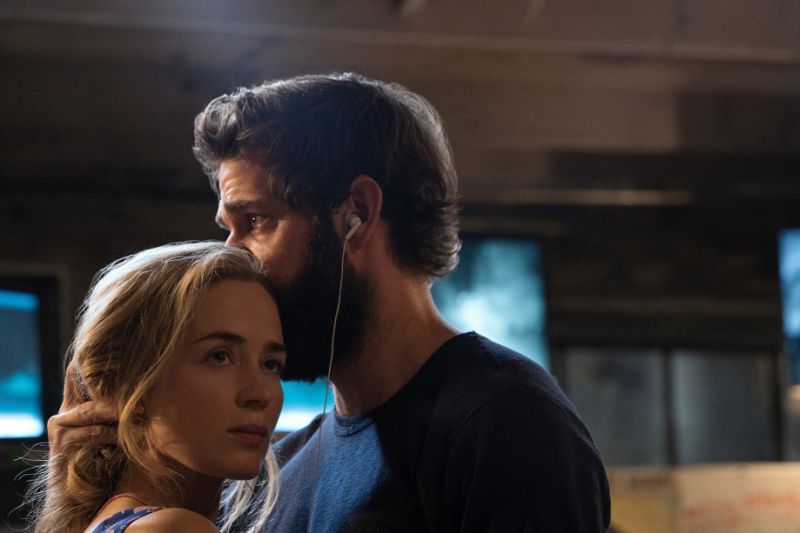 That may not seem like a fun time to shell out money for, but trust me it is. Going to the movies is supposed to be an escape, and this my friends is a HELL of an escape.  A premise that would seem silly on paper is executed to PG-13 perfection by director and star, John Krasinski.  Perhaps it has something to do with the fact that Krasinski and his co-star Emily Blunt are married with children in real life, but regardless it’s impossible not to become very invested in the fate of this family right from the jump.  A lot of it reminded me of the best elements of Signs, The Walking Dead, and even Jurassic Park. Why are kid siblings in peril so much fun to watch?

I definitely recommend seeing this in the theater, but for the sake of your companions don’t order any candy or popcorn.  This film is meant to be watched in an environment in which you can literally hear a pin drop.  They actually made an announcement at the beginning of the movie to try and refrain from making much noise, which I’ve never seen before at this particular venue.  I’m glad they did, because A Quiet Place is basically a silent roller-coaster. Grade: A+

For about 24 hours immediately following its premiere at Austin’s SXSW Festival, Steven Spielberg’s Ready Player One received exuberant buzz across the various internet waves, hinting that WB had a soon to be juggernaut for all ages on their hands.  However in the three weeks between that premiere and its wide release, a strong undertow of backlash has emerged calling bullshit on the SXSW in-the-moment championing.  Now, because we can’t have nice things the most popular movies usually come with an eventual backlash, but this one felt different, more fervent.  On The Ringer’s ‘The Watch’ podcast, Andy Greenwald went as far as calling Ready Player One evil.  I repeat, he called a movie ultimately meant for kids straight up evil.  This sure was a swift turnaround.  Did Roseanne get a hold of Spielberg’s Twitter account or something?

Rated Greg’s take on Ready Player One is somewhere in between. There are a few set pieces that are quite good and look great on the big screen, CGI heavy as they are.  I know I’ve bitched about the over dependency on CGI action in 2018, but if you’re going to go that route whatever Spielberg orchestrates here is the way to go.  20+ years after the wonderfully aged Jurassic Park, his eye for chaotic fantastical action remains top notch even with the added technology.

That’s it though as far as the positives of Ready Player One.  It’s all very surface level.  I don’t know if this movie is evil, but I will agree that its message is on some bulllllllllshit. Ready Player One basically argues that if you’re not happy with the way things are going in your life, it’s perfectly fine to do nothing about it and focus entirely on an online fantasy persona.  Plenty of great movies tell audiences to embrace their inner strange (© Everybody Wants Some) but it’s entirely different to proactively coddle shut-ins afraid of reality.

There’s also the cheapness with how Ready Player One manifests its inherent nostalgia. The main selling point of the movie, at least to the 25-40 year old demographic, is “Come watch Ready Player One and relive your childhood. It contains a criss cross of over a hundred different pop culture stimuli from 1980 – 1995, all sharing the same screen for the first time.”  But, with one fantastic extended exception that I won’t dare spoil, there’s very little cleverness into how the movie enlists these avatars.  Why the fuck should I care that I spotted a Battletoad for a split second if there’s no context?  Is it supposed to make the audience feel special as they recognize each of the hidden Easter Eggs?  I don’t know, the whole thing just reminded me of Stan Marsh’s take on The Force Awakens.

And on top of that, the perfect 80’s/90’s pop culture mashup film already occurred last year in LEGO Batman.  Ready Player One, sir, is no LEGO Batman.  Grade: C

Happy April Fools Rated Greg readers!  Last year was an especially strong Q1 (Get Out, Logan) however traditionally there’s not a ton of great material released January – March, which appears to be the case in 2018.  Black Panther is obviously still having a moment (currently the fifth highest grossing movie of all time) but rather shoddy CGI action holds it back from BANGER status.  Den of Thieves is pretty decent but will only appeal to a specific type of dumb action film junkie.  Ready Player One has pockets of very enjoyable stimuli intertwined within an otherwise corny movie.  Annihilation, Unsane, and Thoroughbreds are all impressively made artsy at-bats but I wouldn’t exactly recommend them to a friend as great forms of entertainment.

And of course we have several shitty Netflix originals (they have some occasional good ones, but man they put out a lot of bad movies).  I feel especially duped by Veronica.  Does the below tweet by The Rock seem like a sneaky ad to you?  This is the main reason I checked it out, but upon closer examination I’m thinking Netflix had to pay him for this.

Oh well, onto Q2. There are some massive titles coming up as May and June are the heart of Blockbuster season. I’m sure Avengers, Han Solo, Jurassic World 2 will all be fine, but I CANNOT F’ING WAIT for Sicario 2.