A few years ago, I watched this movie called Imperium about a young FBI agent who goes undercover to infiltrate a dangerous white nationalist group in present day Virginia.  This logline seemed like a promising enough thriller at the time….. until I realized that the tough guy with a gun was being played by none other than Daniel Radcliffe (aka Harry Potter).  It just didn’t work.  I believe Radcliffe to be a charming actor (shout out to the rom-com What If?) but not every movie star is meant to be an action star.  I mean, I don’t recall Matthew Broderick or Michael J Fox ever picking up a gun?  They may have well of casted Michael Cera.  It would have been the same result (perhaps it has something to do with child stars). 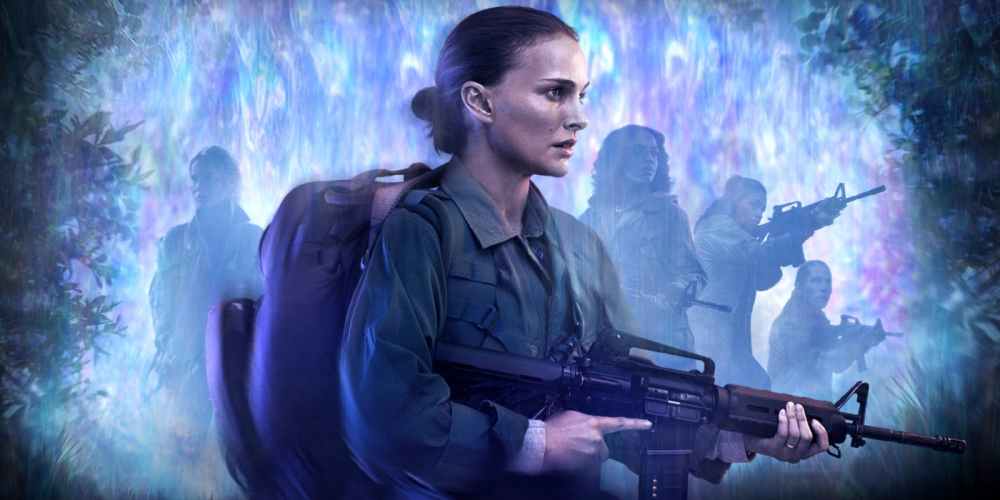 Where am I going with this?  Oh yeah, so a recent big release, Annihilation, brought on similar reservations because it had Natalie Portman wielding an assault rifle front and center on the poster.  This seemed like a bit of a stretch.  Isn’t she basically the same size as Anna Kendrick?  Fuck it though, let’s give her the benefit of the doubt.  If director Alex Garland (Ex Machina, 28 Days Later) has faith that she can pull this off, I was willing to give Annihilation a shot.

Loosely based on a popular science fiction novel of the same name, Annihilation follows Portman and four other military-trained scientists as they brave a quarantined piece of land in the Everglades to investigate a cryptic occurrence of marines gone missing.  The first act is a mystery, the second act a horror, and the third a batshit, avant garde art film, but I’m getting ahead of myself.

Did I mention the team of five is all female?  Jennifer Jason Leigh, Gina Rodriguez, Tessa Thompson, and Tuva Novotny round out the impressive starting 5.  Having male escorts on the dangerous mission into the wilderness isn’t even considered within the plot, which I think is cool.  And nor should it have been by the way, as you can officially add badass onto Natalie Portman’s acting resume after this film.  There are images in Annihilation that might provoke thoughts of an all-female Ghostbusters, but the dark and despondent tone will quickly push those thoughts right the fuck onto oncoming traffic.  If anything, I’d compare it to an all-female The Grey, one of the most underrated movies this decade (or at least the first two acts).

Two thirds of Annihilation is held down by three fantastic, perfectly executed scenes that I’ve thought a lot about since my first #moviepass experience at the PG Plaza theater. One includes the best use of Crosby Stills and Nash in a movie to my recollection, another involving a purely one of a kind animal attack as hinted in the trailer.   But because the third act is sooooo out there, I have a hard time recommending this film to just anyone.  It was publicized that even Annihilation’s distributor Paramount thought the film might be too smart for it’s own good, so much so that they hedged their bets on the financial prospects of the film, releasing it wide in America but selling the international rights wholesale to Netflix.  If you’re into really strange, off kilter stuff like 2001: A Space Odyssey or better yet Twin Peaks, sure give Annihilation a whirl, but Rated Greg has never been on that wavelength.   Grade: B+